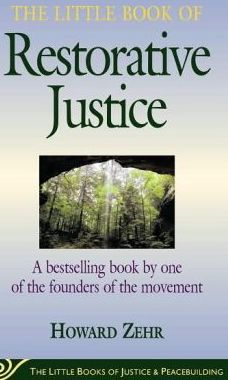 A well-written and meaningful primer, this book introduces the concept of restorative justice, offering basic information accompanied with indications for further research in specific areas of application. This field, begun in the 1980’s, seeks to develop alternative approaches to deal with crime than the standard consignment and abandonment in prison. Restorative justice (RJ) recognizes that there are multiple parties involved in the process of dealing with wrongdoing. It seeks to involve these parties—from offender to offended, to family members, to representatives of social organizations—in order to “make things right,” both on an individual level and a societal level. RJ seeks to work where the limitations of the ‘system’ prevent effective standard correctional procedure. It seeks out existing structures in the culture that facilitate restoration and uses them to effectuate positive change. The author offers several different parameters for using RJ and ‘signposts’ to direct and measure the effectiveness of a Restorative process. RJ is used in many juvenile justice systems, can be used effectively in non-violent crime, and is used selectively with violent crime (often indirectly through family members) in order to lead toward a sense that responsibility is taken, if not closure.

This material should be read by Christian volunteers involved in ministry, as the core concepts of Christianity are restorative in nature. Restorative Justice, as described in this book, should not be pigeon-holed as overtly Christian (being used in settings where mention of Christianity would not necessarily be constructive), and thus serves effectively as a tool. For a HopeWorks volunteer involved as a Faith Encourager, it should impact the conversations with PCD students, encouraging success in the program that may also lead to restoring one’s relationship with God and with one’s fellow man. The thoughtful Christian will immediately see a wider application of the restorative process in life, in the work setting or at home, thus integrity will lead the volunteer to learn to apply the tenants of Restorative Justice in one’s own life. By Lewis Short